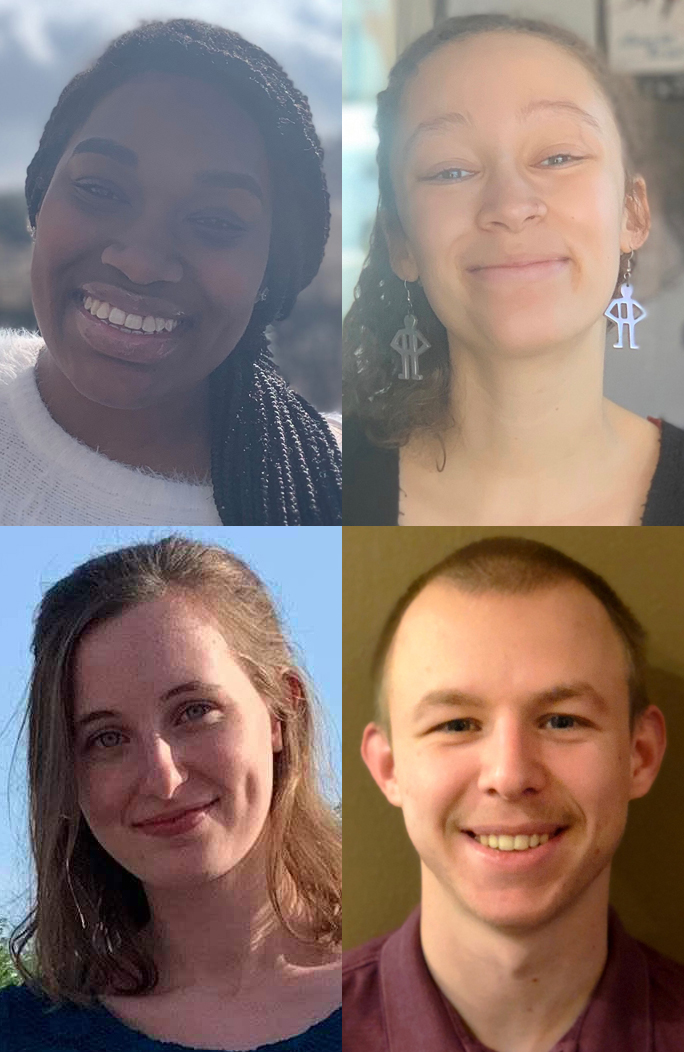 Four scholarships will be given out during the WBA Student Seminar on March 7 to students studying broadcasting in Wisconsin. The recipients are:

Enjoyiana is attending the University of Wisconsin-Madison. She is majoring in Journalism and Political Economy, Philosophy, and Politics. She is planning to graduate in 2021.

Enjoyiana’s career goal is to become a political broadcast journalist. She started her ambitious academic career early working for the Simpson Street Free Press for five years where she earned a reputation for her work ethic, maturity, and charisma.

At UW-Madison, Enjoyiana joined The Black Voice, an online magazine for Black students, and the UW chapter of the National Association of Black Journalists, as well as numerous other campus groups. She has aggressively sought experience outside the classroom. Enjoyiana authored freelance pieces for The Cap Times and has been an intern at the Wisconsin Center for Investigative Journalism, WORT-FM, and Madison Magazine.

Enjoyiana is described as a strong writer, critical thinker, a role model for young people, and “sophisticated beyond her freshman status.” She’s respected by journalists and peers throughout Dane County.

Zoey is attending the University of Wisconsin-Madison. She is majoring in Communication Arts. Zoey is planning to graduate in the spring of 2020.

Zoey’s career goal is to work at a non-commercial community center radio station with a role in promotions or social media management.

Zoey has served as traffic director and disc jockey at WSUM-FM, the UW-Madison campus radio station. On her own initiative, she created the Music Writing Club which meets weekly to improve the staff’s quality in writing about music.

Off campus she’s served as a programming intern at WYMS-FM in Milwaukee, promotions assistant at WKTI-FM in Milwaukee, and community relations director and disc jockey at KXSU-FM in Seattle.

Zoey is described a model student and good worker who sees the potential in public radio and wants to bring that to the next generation. Her faculty advisor describes her as smart, reliable, and honest. She’s tenacious in tackling a challenge and conscientious in her work.

Kaitlyn is attending the University of Wisconsin-Oshkosh. She is majoring in Radio-TV-Film and Geography. Kaitlyn is planning to graduate in the spring of 2021.

Kaitlyn’s career goal is to produce multi-camera shows, whether they are news programs, talk shows, panel shows, or sitcoms. She writes that she enjoys the fast paced nature of the field and finds it rewarding to see the many pieces of a TV program come together.

Kaitlyn is described as a passionate, dedicated student with impressive producing skills. She is executive producer on a highly-complicated children’s puppet show, Hello, Campers, on campus TV station Titan TV where she’s credited with juggling multiple episodes of the complex production.

She also serves as assistant news director for WRST-FM and has interned at WCWI-FM.

Kaitlyn is respected among her peers and faculty and is committed to her career in television. Her classmates look to her for guidance and support. Her advisor wrote that Kaitlyn is ready to have a lasting impact in television broadcasting.

Nathan is attending the University of Wisconsin-Parkside. He is majoring in Communication and is planning to graduate in the winter of 2021.

Nathan’s career goal is to work at a radio station as a disc jockey or music director.

Nathan works at the UW-Parkside student radio station WIPZ, starting as the host of a classic rock program and has since taken the position of Music Director. He’s been identified as a leader at the station.

Nathan has taken it upon himself to hone his skills, seeking instruction outside his courses to improve his on-air skills and give himself a musical background that would make him a better music director. As his skills improved, he enhanced the creativity put into his show. He’s dedicated to making sure his weekly show is the best it can be.

Nathan is described as a hardworking, dedicated, and respectful. He has a keen interest in radio broadcasting with a strong desire to succeed.