In accordance with Madison Marriott West guidelines, the hotel is abiding by whatever Dane County health mandates are in place at the time of the Student Seminar. At this time, attendees will be required to wear a mask except while eating or under other circumstances as detailed in the mandate. Masks and hand sanitizer will be available. 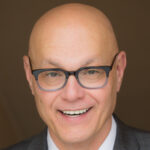 Previously, Dan was Senior Vice President of Digital Content Strategy for iHeartMedia. In that role, he was responsible for the development of a national content strategy as well as the execution of all content across iHeart’s 850+ radio station sites in 150 markets. Prior to joining iHeartMedia, Dan was a Senior Vice President at Interactive One, part of the Radio One (now Urban One) family of companies. Dan oversaw the digital platforms of the company’s 50+ radio stations. He also managed relationships with other digital publishers that partnered with Interactive One.

Prior to joining Urban One, Dan was Director of Digital Media at WCBS-TV, New York, the flagship station of the CBS Television Stations Group. While there, he shepherded wcbstv.com from fifth place to first place among local television news websites in the nation’s largest media market. He helped other CBS owned and operated TV stations across the country enhance their digital strategies. He also served as an executive producer for WCBS-TV News.

Dan’s career includes many years in radio management. He was news director/assistant program director at WTMJ-AM in Milwaukee where he was in charge of news and special events coverage. He also helped run operations for WTMJ’s Green Bay Packers, Milwaukee Brewers and Milwaukee Bucks radio networks. Before Milwaukee, Dan was news director at KTTS-AM/FM in his hometown of Springfield, Mo. He holds an Electronic Media Communications degree from Missouri State University, which honored him in June 2018 with its Outstanding Alumnus of the Year Award, citing his career in journalism and leadership positions at RTDNA as evidence of his years-long commitment to public service, a primary mission of the university.