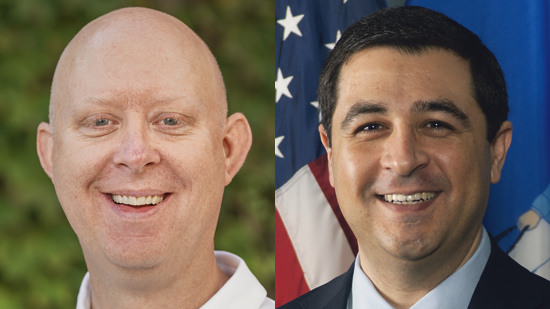 UW Volleyball Head Coach Kelly Sheffield and Wisconsin Attorney General Josh Kaul will speak at the business luncheon during the upcoming WBA Winter Conference in Madison. The conference will be held Jan. 29 at the Madison Concourse Hotel and is also part of the WBA State Legislative Day.

In six years at Wisconsin, Kelly Sheffield has brought the Badger volleyball program back to national prominence. He has led UW to six-straight NCAA Sweet 16 tournament appearances, including a berth in the 2013 national championship match in his first season. Wisconsin has also finished among the top-four teams in the Big Ten Conference in five of the past six seasons. UW has consistently been ranked among the top teams in the nation, sitting among the top 25 teams for 91 straight weeks. Wisconsin has also earned 22 All-America honors during Sheffield’s tenure while 14 players have been named All-Big Ten.

Josh Kaul was sworn in as Wisconsin’s 45th Attorney General in 2019. Kaul served as a federal prosecutor in Baltimore, where he prosecuted murderers, gang members, and drug traffickers. After moving back home to Wisconsin, he worked to protect our right to vote, going to court to challenge restrictions on voting. Since being sworn in, DOJ has worked to combat the opioid epidemic and the increasing use of meth in Wisconsin, to make our schools and communities safer from gun violence, and to pass legislation designed to prevent Wisconsin from having a backlog of untested sexual assault kits. Kaul grew up in Oshkosh and Fond du Lac. He went to college at Yale, majoring in history and economics and graduating with honors. He then attended Stanford Law School, where he served as President of the Stanford Law Review.

The business luncheon will be followed by a legislative briefing and calls to lawmakers at the State Capitol. The day also includes a job fair and EEO sessions.