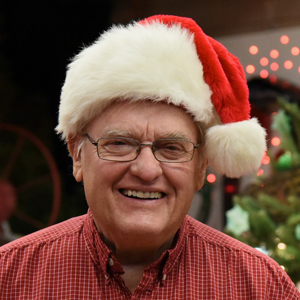 About 30 years ago Santa Claus landed his sleigh on top of Vilas Hall, the home of Wisconsin Public Radio (WPR), on the University of Wisconsin – Madison campus. Santa had agreed to be a guest on WPR’s popular “The Larry Meiller Show” to take calls and questions from kids around the state.

Host Larry Meiller vividly remembers his first time interviewing Santa in what has now become an annual tradition. “It was a particularly snowy day,” Meiller said. “The sleigh had a very rough landing and came really close to hitting one of our satellite dishes,” he added. “It was a good thing Rudolph’s nose helped guide him and the other reindeer to a safe landing.”

That day was the beginning of a tradition that continues this year with Santa joining Meiller for his show on Friday, December 24 at 11 a.m. on WPR’s The Ideas Network stations statewide. “It’s really a lot of fun hearing from all the kids that call in to talk with Santa,” said Jill Nadeau, producer of the show. “The special relationship between Santa and Larry adds that extra twinkle to the program,” she added.

Meiller says he looks forward to having Santa on the radio every year, “Santa really cares about our kids. You can hear it in how he listens and interacts with them on the air; it’s my favorite show of the year,” he said.

Wisconsinites have always turned to WPR for trustworthy, research-driven, unbiased journalism and civil discourse. Equally essential, especially during this time of year, is that WPR’s music, entertainment and cultural programs provide inspiration and joy, like that of a child talking with Santa.