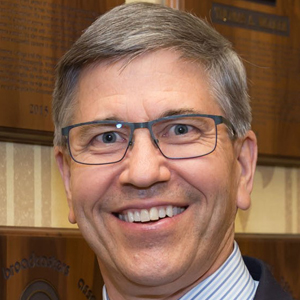 WBA Hall of Famer Chuck Roth is retiring after a career in broadcasting that started when he was in high school.

“From my senior year of high school, I knew broadcasting was the career I wanted to pursue,” Roth said. “I was very fortunate to able to work in broadcasting for my entire career, with so many great people, and to do it all right here in Wisconsin.”

Roth graduated from the University of Wisconsin-Stevens Point in 1980 and began his professional broadcasting career that year as an account executive with WQOW-TV in Eau Claire, and became station manager in 1985. In 1988 he moved to La Crosse, and for the next 20 years served as vice president/general manager for WQOW and WXOW-TV. In 2010 he moved into a corporate role for the stations’ parent company, Quincy Media (QMI), taking on the position of director of business administration.

In January 2019 he added the title of regional vice president as he took on oversight of KVOA-TV in Tucson, Arizona along with oversight of the digital business operations of QMI.

Quincy Media, Inc. closed on its sale to Gray Television in August. He joined Gray Television on a temporary basis to assist with the transition of the sale and he retired on Sept. 24.

Roth was on the WBA board of directors from 1992-2002 and was board chair in 2000, has served on the WBA Foundation board. He was inducted into the WBA Hall of Fame in 2016. He’s served his community as president of the boards of United Way, La Crosse Community Theatre, and La Crosse Performing Arts Center.

“LuAnn and I are looking forward to traveling, spending time with friends and family, staying connected to our community, and keeping Wisconsin our home,” Roth said.