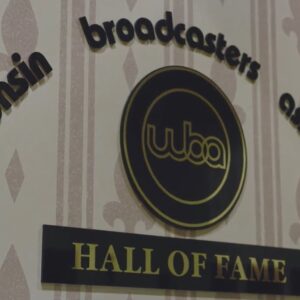 The Wisconsin Broadcasters Association Foundation is releasing new radio and TV spots promoting the WBA Hall of Fame at the Hilton Milwaukee City Center.
The spots feature WBA and WBA Foundation President and CEO Michelle Vetterkind. you can download the spots here.
“The Wisconsin Broadcasters Hall of Fame is a wonderful landmark to showcase Wisconsin’s rich broadcasting heritage,” Vetterkind said. “Thank you to the Hilton Milwaukee City Center for providing such a great venue and being such a wonderful partner.”
The WBA Foundation also thanks WITI-TV in Milwaukee for producing the spots.

“The WBA’s refresh of its Hall of Fame promotions introduces and in many cases re-introduces this historic gem and the journalists who made it possible to Milwaukee locals and visitors,” said Lindsey McKee, communications manager for VISIT Milwaukee. “We are so honored to have this remarkable Hall of Fame in the heart of downtown Milwaukee inside the Hilton Milwaukee City Center, and to see more and more broadcasters brilliantly recognized every year for their contributions.”

In October, 1989, Alfred C. Sykes, then Chairman of the Federal Communications Commission, came to Wisconsin to formally dedicate a Hall of Fame display, including plaques honoring the inductees, at the State Historical Society of Wisconsin Library in Madison. In 2010, due to remodeling of the SHSW facility, the display was removed. The Hall of Fame exhibit was relocated to the Hilton Milwaukee City Center in 2015 and enhanced with a touchscreen display featuring all inductee commemorative videos.

All the videos and many other artifacts from Wisconsin broadcasting are available online in the Wisconsin Broadcasting Museum.

The next set of Hall of Fame inductees will be recognized June 23 at the 2022 WBA Summer Conference at the Radisson in La Crosse.