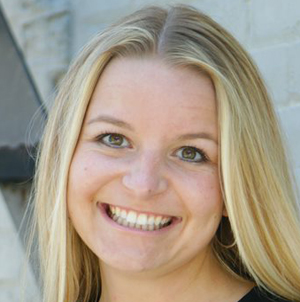 Zoromski said that once he recognized her leadership potential, he asked her to set aside her dreams of working in television sports to consider applying to be the MUTV general manager and later the Executive Director of Marquette Wire, overseeing the student newspaper, magazine, television station, radio station, and advertising department.

“She leads by clearly articulating her vision and passionately driving it to completion. She commands attention and admiration because she speaks her mind quietly, respectfully, and directly, “Zoromski wrote. “She has carefully and deliberately created a culture of excellence accomplished through kindness, inclusiveness, hard work, and dedication. Aimee works relentlessly to create and maintain a professional, upbeat learning environment, helping lead our organization to 99 national, regional, and state awards for excellence in journalism, including the honor of the Marquette Wire being named one of the top five student media organizations in the country by the College Media Association. She’s a tireless optimist who leads with kindness, grace, and style.”

“Each week when I meet with our EDI, we have honest conversations about how our organization can improve,” Galaszewski wrote. “I challenge our staff to speak with sources that don’t look like them and find story ideas outside of their comfort zones.”

“Together, they have improved diversity of coverage and staffing, and, importantly, have instilled an organizational culture built on the foundations of diverse visions and diverse voices,” Zoromski wrote.

Zoromski also noted Galaszewski’s navigation of the COVID-19 pandemic and her ability to challenge her producers to think differently and find new opportunities to cover the campus.

“My experiences in student media have taught me a great lesson: leaders should never be satisfied,” Galaszewski wrote. “I’m always striving to improve and I encourage my team to do the same, which has helped to reshape the culture of the Marquette Wire.”

Galaszewski will be recognized with the Student Leadership Award on March 5 at the WBA Student Seminar.