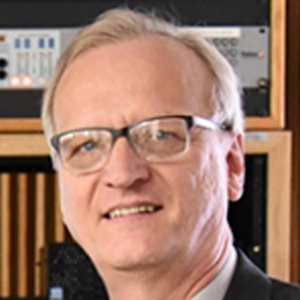 After 35 years, Wisconsin Public Radio (WPR) Senior Regional Manager and host of “The West Side” Dean Kallenbach is retiring.

Kallenbach joined WPR’s bureau at UW-Stout in 1986 as a reporter and local host for NPR’s “Morning Edition.” The Menomonie campus bureau was part of an effort to expand WPR’s local journalism and community connections outside of the station’s headquarters in Madison. The bureau moved to Eau Claire in 1990 and Kallenbach was promoted to Regional Manager.

According to WPR Director Mike Crane, Kallenbach helped establish the regional model that WPR continues to rely on to this day. “Dean is a wonderful advocate for the power of local radio. He truly believes in community service and his entire approach to work and life exemplifies that commitment.,” Crane said. “In the past 35 years, he’s influenced nearly every aspect of our work — as a host and manager, as a mentor and a leader, and as a colleague and friend. I will really miss him.”

Throughout his career, Kallenbach has been driven by the relationships he’s built within WPR and in the community.  He cultivated partnerships with more than 30 non-profit arts, cultural, and humanitarian organizations throughout western Wisconsin. He has also taken great care and pride in mentoring students, many of which he recruited to work for WPR.

“My main focus as a regional manager has been to reflect the communities and issues of my region to WPR,” Kallenbach said. “In order to do that most effectively, you have to be in the community, to be part of the community. But, what’s really kept me inspired has been working with student broadcasters and interns and seeing many of them grow into great professionals.”

One of those former interns, Clara Neupert, has been appointed interim host of “The West Side”.

Kallenbach is also a member of the Wisconsin Broadcasters Association Board of Directors where his experience has benefitted broadcasters throughout the state. “I’ve been fortunate to know Dean for many years,” WBA President and CEO Michelle Vetterkind said. “From his days managing WSUP-FM at UW-Platteville to his current leadership role at WPR and membership on the WBA Board of Directors, he’s always been the ‘rock solid’ broadcaster that you can count on. He’s simply an all-around terrific guy who’s been a tremendous asset to our industry.”

Reflecting on his career at WPR and his work in commercial radio and television, Kallenbach said, “I’ve had 46 years in a career that I love. How can I be anything but grateful? I’ve been blessed.”