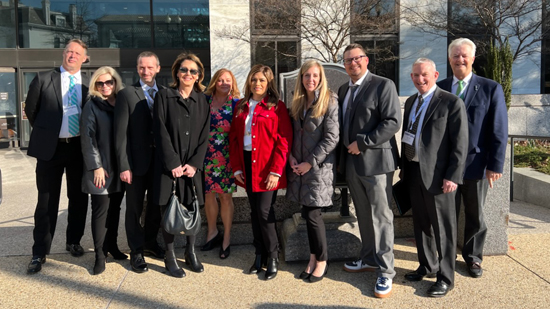 Wisconsin broadcasters recently visited lawmakers and regulators in Washington D.C. to talk about issues like a performances tax and bills that would support journalism.

A group of eight Wisconsin broadcasters visited Washington DC between Feb. 28 and March 2 to meet with the National Association of Broadcasters and take meetings with members of the Wisconsin Congressional delegation and the FCC.

WBA members met with Rep. Bryan Steil, Rep. Glenn Grothman, Sen. Ron Johnson, and staff from the offices of Rep. Scott Fitzgerald, Rep. Mike Gallagher, and Sen. Tammy Baldwin. Broadcasters will be meeting with the remaining members of the Wisconsin Congressional delegation in their districts or on Zoom.

Thank you to all the broadcasters who participated in these critical advocacy events.