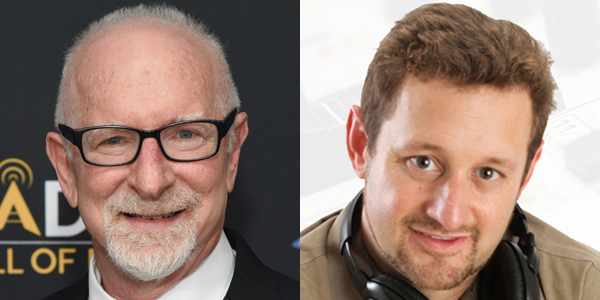 As we are writing this, our plan is to head out to the CES (once known as the Consumer Electronics Show) in Las Vegas the first week of January. For the last dozen years, we have used this event as our annual tone-setter for the year ahead. Hopefully, the omicron variant won’t sabotage our plans. But in the spirit of CES – a place where we see the future – we’ll do our best to predict six of the key trends that should be on everyone’s radar.

Consumers (and your elected representatives) are increasingly realizing that when it comes to social media, WE are the product. Nothing is free, and our data will continue to be sold and marketed to advertisers.

The author and social psychologist Shoshana Zuboff has written a book called The Age of Surveillance Capitalism, and it sums up the business model of big tech very well. To what degree will (and can) content be moderated, and will we be able to protect our data – our information – in the “metaverse?”

For broadcasters, it is essential to understand what you can and cannot do, respecting the privacy of your listeners and viewers, and provide an environment they trust. More and more, privacy issues will dominate conversations about the role of media and technology in our lives in 2022. 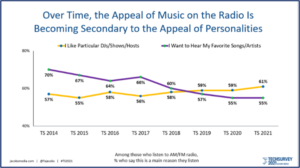 In our annual Techsurvey, we’ve seen that as digital platforms like Spotify, Pandora, and YouTube have made it easier for people to access the music they want, on-air talent has become a more important factor in attracting people to radio.

This reflects a larger trend: As technology has given rise to more news channels, more podcasts, and more sources of music, the importance of talent as a differentiator increases. This has shifted the balance of power in the relationship between management and on-air talent.

As managers make technological changes in response to new conditions created by the pandemic, they need to be conscious of their impact on talent. The most prominent example came earlier this year, not from radio or television but from the movie industry. Due to the ongoing health crisis, Marvel decided to release the film Black Widow on the Disney Plus streaming service at the same time it was released in theaters. Star Scarlett Johansson promptly filed suit, claiming this breached her contract and cost her substantial bonus money. The suit was eventually settled, but it reverberations will affect how management thinks about implementing technological changes and the impact it has on talent for years to come.

As talent’s stock has risen in the building, it has also been amplified in the words of media and technology. New digital platforms have opened up opportunities for work and content creation, increasing the competition for talent.

For years, we’ve seen this in Hollywood, where Netflix, Hulu, Amazon Prime, and Apple TV have provided new options for A-level actors. Now, we’re seeing it in radio and television broadcasting as well. Two high-profile examples from this year: Fox News veteran Chris Wallace departed to host a show on the CNN+ streaming service, and Noel King left NPR’s Morning Edition for Vox’s Today Explained. Talent is more important than ever, and the competition for talent is increasing.

Hanging on to key employees and impactful personalities in 2022 will require more than just money and perks. The work culture – already in flux thanks to COVID – may be a major determinant in talent remaining with their home stations in Wisconsin, or testing the waters by seeking out new possibilities.

The first 30 years of the internet era saw the proliferation of digital publishing tools. Where it once required expensive transmitters, studios, or printing presses to reach a large audience, the internet made it possible for anyone to reach a large audience with little more than a smartphone. Everybody became a content creator in the hope of attracting an audience, and the world was flooded with a glut of blogs, videos, and podcasts.

During the pandemic, we have seen a new class of digital platforms go mainstream. These tools – including Zoom, Facebook Groups, Slack, and Twitch – facilitate interaction between people. With these tools, mass communication is not a one-way broadcast, but a continual back-and-forth dialogue. This year’s Techsurvey showed nearly four in ten respondents participate in a meeting, call, or get-together on a platform like Zoom, Teams, or FaceTime at least weekly or more often. Even when the pandemic subsides, this trend will not be going away.

This will put media outlets in the business of community building. In short, the old model was to create content and attract an audience. The new model will be to build a space where a community can gather. The difference between a community and an audience is simple: Community members interact with each other, audience members do not. Content creation will play an important role in community building, but new duties, such as moderation and encouraging interaction, will also be key. The media companies that thrive will figure out how to use these new technologies to transform their audiences into communities.

The “Audio Revolution” is upon us, as new sites and audio platforms attract publishers and hobbyists alike. Podcasting has experienced a meteoric rise, not just in the number of shows that no longer exist in the world, but in the ability for companies to monetize them.

The big players are dominating the space – Spotify, iHeartMedia, NPR, and of course, Apple are sucking up share and real estate. With more than two million podcasts (and growing), can the little guy (or gal) still produce a podcast that will be heard by enough listeners to make a difference – and make some money?

What was once a quaint techie nook where creators could commune and share tips and hacks has now become big business, has rapidly become a marketplace where big players are buying up the smaller production houses.

COVID may have slowed down many businesses and industries, but automakers and their suppliers didn’t get the memo. They’ve spent much of the pandemic working feverishly on both autonomous technology as well as electrification. In the process, dashboards continue to evolve, embedding Artificial Intelligence and other technology into their systems.

Others going along for the ride are becoming known as the “passenger economy.” Egged on perhaps by Elon Musk and Tesla, the conventional automakers are beefing up their dashboard hardware – and software, making it easy for drivers, as well as “co-drivers,” to participate in many content options, from streaming audio to video to games. The 56” wide Hyperscreen by Mercedes-Benz (pictured) is a prime example.

Obviously, there are safety issues, but it is clear when you talk to auto execs, the trajectory for in-dash entertainment and information is heading straight up. That has obvious implications for radio broadcasters, as well as TV programmers and managers who will soon visualize a world where vehicles carry their content.

We hope to bring back all sorts of ideas and innovations back from CES. We wish you all a great 2022.

By Fred Jacobs and Seth Resler