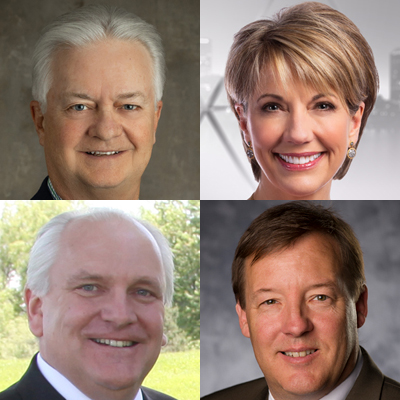 The Wisconsin Broadcasters Association Foundation is proud to announce the 2022 WBA Hall of Fame inductees:
·        Chris Bernier is a station owner who leads by example, aided by his lifelong career in radio with experience in every facet of the business.
·        Joyce Garbaciak is a respected journalist with a long career in Milwaukee TV.
·        Howard Gloede (1958-2019) spent his career in La Crosse inspiring broadcasters and making a difference for local residents through his leadership at a group of Mid-West Family stations.
·        Gene Purcell (1960-2021) was a leader in public broadcasting in Wisconsin whose numerous accomplishments are accentuated by his humility and passion for journalism.
The Wisconsin Broadcasters Hall of Fame was created in 1989 to honor broadcasters that have devoted a minimum of 15 years to the broadcasting industry including a minimum of 10 years as a Wisconsin broadcaster. The award recognizes an individual’s history of exemplary leadership in community and statewide service as a broadcast professional.
The first 12 members of the Hall of Fame were inducted during the 1989 WBA Summer Conference. Since 1989, 152 outstanding broadcasters have been honored with Hall of Fame inductions.
Inductees are chosen each year from nominations by WBA members, family members and friends. Broadcasters who have been inducted into the Hall of Fame include managers, personalities, engineers, reporters, educators and those broadcasting pioneers who were all of the above.
In October 1989, Alfred C. Sykes, then Chairman of the Federal Communications Commission, came to Wisconsin to formally dedicate a Hall of Fame display, including plaques honoring the inductees, at the State Historical Society of Wisconsin Library in Madison. In 2010, due to remodeling of the SHSW facility, the display was removed and put in storage.
The display now resides at the Hilton Milwaukee City Center. The Wisconsin Broadcasters Hall of Fame also has a permanent, virtual display at the online Wisconsin Museum of Broadcasting which debuted in 2009 at www.wisconsinbroadcastingmuseum.org, where the Wisconsin Broadcasters Hall of Fame Gallery is one of our major attractions.

The 2022 Hall of Fame honorees will be celebrated June 23 at the 2022 Summer Conference at the La Crosse Radisson.

Our 2022 inductees are as follows:
Chris Bernier is a station owner who leads by example, aided by his lifelong career in radio with experience in every facet of the business. His dedication and passion for radio has led to his role as the owner of 35 stations in five states and as an admired industry leader.
Chris started his career in radio at age 19 as an on-air host and by age 21 he was a station manager and by age 22 he was part owner. He worked every job in radio including play-by-play, news, engineering, tower climbing, traffic, sales, marketing, management, and ownership. In 1990, he formed his own company to operate stations in Waupun, Fond du Lac, Mayville, and Ripon. In 2006 he joined Armada Media, a group he now leads as President and CEO with stations in Nebraska, Colorado, Kansas, Michigan, and Wisconsin.
He was co-chair of the largest fundraising group in Fond du Lac, the Charity Open, that supports a local hospice provider and cancer center. He’s held leadership roles in Fond du Lac Rotary, a committee of the Milwaukee Diocese responsible for developing St. Mary’s Academy, the WBA Board, and has served as a golf coach.
Chris has made a lasting impact on broadcasting in Wisconsin with his inspirational leadership, love of radio, and passion for service.
Joyce Garbaciak is a respected journalist with a long career in Milwaukee TV. She has an insatiable quest for credible, objective, and impactful news in service to her audience. Her natural command of the anchor desk has earned her the respect of broadcast journalists across the country.
Joyce started as a reporter and anchor at WSAW-TV in Wausau after earning bachelor’s and master’s degrees from Northwestern University’s Medill School of Journalism. Her skills and work ethic quickly launched her to a station in Nashville, Tennessee and, in 1988, Milwaukee, where she would spend most of her career, first anchoring and reporting for WITI-TV and later with WISN-TV.
She is praised for her anchoring, reporting, and writing, and her skills as an interviewer are described as “unequalled.” She has covered countless high-profile stories, including an investigative series that led to a change in Wisconsin state law regarding the posting of code violations at childcare centers. She has been the recipient of Peabody, Emmy, and Murrow awards, as well as state and local honors. She is also involved in local charities and is a mentor to young journalists.
Joyce’s passion for accurate, balanced journalism serves an audience that has benefited in both tangible and intangible ways from her skills, dedication, and warm heart.
Howard Gloede (1958-2019) spent his career in La Crosse inspiring broadcasters and making a difference for local residents through his leadership at a group of Mid-West Family stations.
Howard spent his career at Mid-West Family, starting as an intern in 1979 while attending Western Wisconsin Technical College. By 1982, he was the top biller in the sales department. In 1991, he was one of the first to be recognized by Mid-West Family as a “Master Sales Performer” and promoted to local sales manager. He was subsequently named general sales manager in 1996, and in 2009, named president and GM of Mid-West Family La Crosse. He was recognized for his ability to identify talent.
During Howard’s 40 years at the station, he was integral to United Way fundraising initiatives resulting in tens of thousands of dollars of airtime donated to promote the annual campaign while also inspiring all employees to support the campaign. He also oversaw numerous charitable campaigns and the establishment of the 95-7 Rock, Z-Cares and KQCares Foundations to support the community.
Howard loved the radio businesses and was seen as a father figure to many he mentored. His community spirit was infectious, and he knew how to build relationships that brought out the best in everyone.
Gene Purcell (1960-2021) was a leader in public broadcasting in Wisconsin whose numerous accomplishments are accentuated by his humility and passion for journalism. As his career expanded into new leadership roles, he maintained his love for production and being on the air.
Gene was instantly at home behind the microphone when he took his first step into broadcasting as a host on WLSU in La Crosse where he was a college student. After a short stint in commercial radio, he returned to WLSU as a journalist where he rose through the ranks to be news director, program director and station manager, later joining WPR as southwestern regional manager. From there he moved to Madison to accept a job as deputy director, and later, director of the Educational Communications Board. In 2018, he was named Director of Wisconsin Public Media.
During his career, Gene led public media on many important initiatives, including addressing engineering issues, EAS and public alerting, fundraising, public access to government, an expansion of broadcast and digital services, and transitioning public media from UW-Extension to UW-Madison.
Gene’s sensibility and mild temperament exemplified the spirit of public broadcasting in Wisconsin. He was admired for his leadership and those who met him always felt heard, valued, and befriended.