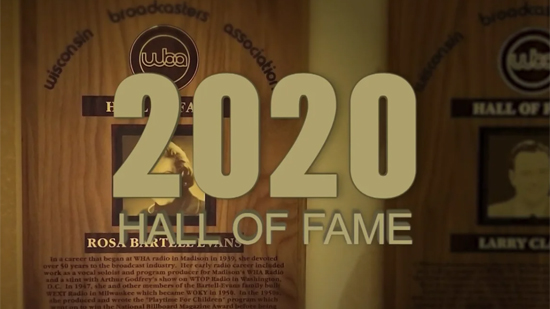 A half-hour program highlighting three WBA Hall of Fame inductees is available to view online and available for stations to air.

The show is available to all WBA television stations, free of charge. It can start airing anytime and is suitable for airing during the holiday season and thereafter as a way to highlight the importance of broadcasting in Wisconsin and the achievements of this year’s inductees. Airing the video is an excellent way to promote and enhance the image of the broadcasting industry in Wisconsin.

Stations interested in getting the captioned video file should contact contact@wi-broadcasters.org or call the WBA office at 608-255-2600 for more information.

We’d like to thank a few WBA member stations for their generous contribution of equipment, personnel, and/or facilities used in production of the 2020 Wisconsin Broadcasters Hall of Fame programs. Those stations include: WMTV, Madison; WKOW-TV, Madison; WITI-TV, Milwaukee; and WISC-TV, Madison.