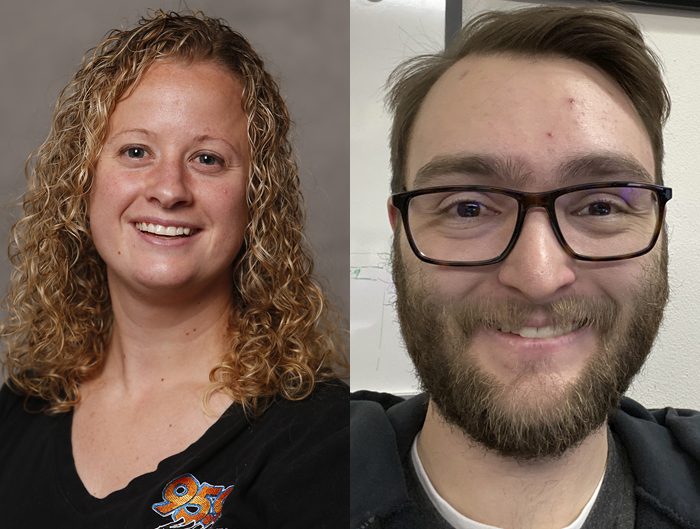 Young professionals are making their mark on broadcasting in Wisconsin and the WBA is recognizing them.

The five other honorees will be identified and profiled in this and the next WBA newsletter and the Young Professional of the Year will be announced in the May/June newsletter and awarded at the WBA Summer Conference on June 17 in La Crosse. The five honorees will also be recognized at the conference.

Our first two honorees are Heather Storm and Eric Bartos:

Company: Woodward Radio Group
Position: Music Director and Air Talent for WKSZ and WKZG
Years at station: Coming up on a decade!
Started in broadcasting (year): Interned at Pittsburgh’s WQED in 2004, starting getting paid as a board op in 2005 (owned then by Infinity Broadcasting).

How did you get into broadcasting? I chose Broadcast Communications as a college major with an interest in news. With a choice of four practicums, radio was listed first so I assumed it was required and fell in love from there.

How do you view the role of young professionals in broadcasting? The role of the young broadcaster is to keep everyone evolving and moving forward. The world and how we consume news and information changes rapidly, and so must our forms and style of broadcasting. We tend to learn more when we are uncomfortable with change, and those already familiar with it help move us forward.

What advice would you give to other young broadcasters? Dive right in. Get involved in as much as you physically can. This is one rule of thumb that has not changed and most likely will never will.

What does the future of broadcasting look like to you? The future is bright.  It just looks different than it did 50 years ago, or 10 years ago, or even one year ago. This is a profession that reflects the world surrounding us and we must evolve to mirror those changes. Our community is full of young, intelligent people who are ready to hustle.

How did you get into broadcasting? I have been interested in all things audio since probably middle school, however I didn’t take a huge interest in radio until I found out there was a college radio station at Michigan Tech University, WMTU. The first thing I did when I got to Michigan Tech was go to a WMTU meeting, I started as just a DJ, but slowly worked my way onto the all student staff in the productions department making liners and underwriter announcements. I was then the production manager for about a year before the station needed a head audio engineer. I took on that role for about two years then I spent a little bit of time as the general manager until I graduated. Once I graduated, I was then hired on as a full time broadcast engineer for the station. I then left that position in 2017 for my current position at Wisconsin Public Radio.

How do you view the role of young professionals in broadcasting? As a young professional in broadcasting I think the most important role we have is to keep finding ways to improve radio and use all this new technology to our advantage, while sharing the knowledge with the older engineers. The radio engineering industry as a whole seems to be falling behind when it comes to technology. Using the old stuff is not going to be sustainable for much longer, which is why it is so important for young professionals to keep pushing the boundaries of technology and not letting radio fall behind or become irrelevant in the future.

What advice would you give to other young broadcasters? The best advice I could give is to learn a little bit of everything. Don’t just focus on one aspect of broadcast engineering. It’s just as important to know how to configure a Cisco network switch as it is to troubleshoot a transmitter. The studio side of radio is turning into a datacenter with audio in it. If you know how to run a VM host and a solid network you will be able to learn the radio side of it in no time. However, if you don’t want to deal with the IT side of things as much, learn all things RF. Good RF engineers are starting to become a rare breed. If you have a solid RF background or a solid IT background you will have great success in the broadcast industry.

What does the future of broadcasting look like to you? To me, the future of broadcast is leaning more towards a fully virtualized radio studio, meaning that the entire station could run on a pair of servers and a pair of network switches. I could even see this letting hosts run shows from anywhere in the world, and not be tied to a studio anymore. I do think it is possible that someday a radio station could run in the cloud, however I don’t think that will be happening any time soon.