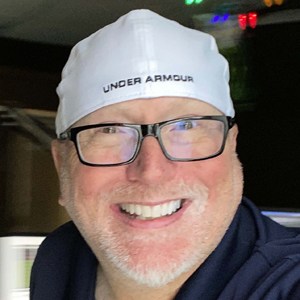 “Morning radio is the place to be!”

And no one knows that better than WIFC’s Dave Kallaway. His radio career spans four decades, with nearly three in his current role.

“We were allowed to listen to the radio in high school, in typing class, and that’s where I first got the bug that radio might be my thing,” he said.

I know Dave Kallaway professionally and I can share that he’s the same radiant guy in person, on-air and at events. So I had to know, how does a guy stay so passionate about broadcasting year after year?

He explained the unique joys and the freedom to be creative that this career has.

“Create events that you’re passionate about. My wife and I love to dance. So that’s where our WIFC Disco Cures Cancer dance came from. We knew we just wanted to dance but what if we did a public dance, and what if we did it to raise money for a charity. We really thought that whole concept would last a couple of years, but we ended up doing it for 19 years!”

He said he’s been married to his wife for 40 years, and they were married on-air, on the radio.

So what advice would he give his younger self in the early years of his career?

“Chill out on the air and talk to the audience. When I started out, there was a lot of screaming going on. DJs that sounded like they were auctioneers and that got old fast. Just talking to listeners, playing good music, having a good time. That’s the way to start your day,” he said.

It’s not uncommon for an incident or a co-worker to make broadcaster’s work-life uncomfortable. I asked Dave if there had ever been a time he thought about pursuing something else.

He said the thought of leaving radio never occurred, but there were times when a boss wanted him to be someone he wasn’t.

“Fortunately those times were very short-lived and worked through,” he said.

Kallaway said the part he enjoys most about morning radio is getting to work with other talent.

“Most other shifts there’s only one person. It’s much more fun to work on the air with others. The other part is getting to do so much in our communities… with events and charity things. I love that part of the gig.”

“I’m sure I sucked at that early on, but I followed a lot of pros along the way and tried to pick up the techniques to asking good questions and being ready when you get short answers, no answers, or in some cases where you’re ready to ask 20 questions and you only get to ask one question because the guest is such a talker.”

If you are concerned with the initial low salary at the entry-level, Kallaway offers the reminder of the growth potential in this career.

“The guy who hired me at WIFC is now the ops manager of the iHeart radio’s country division– a very big step up from working in Wausau, Wisconsin. The other aspect of the low pay thing with radio is that it’s a job that can turn into several jobs and opportunities for making more.” For Kallaway, that’s hosting events and photographing them.

And I had to ask (and man, I am I glad I did) what’s your favorite radio memory?

“One of my favorite bits to do was the “WIFC Mow to Lambeau.” I literally rode a riding lawn mower from Wausau to Lambeau Field in Green Bay. The idea was to have listeners guess how long it would take and if you were closest then you won the mower and tickets to see the Packers play the Bears!

That’s how long it took if you are wondering.