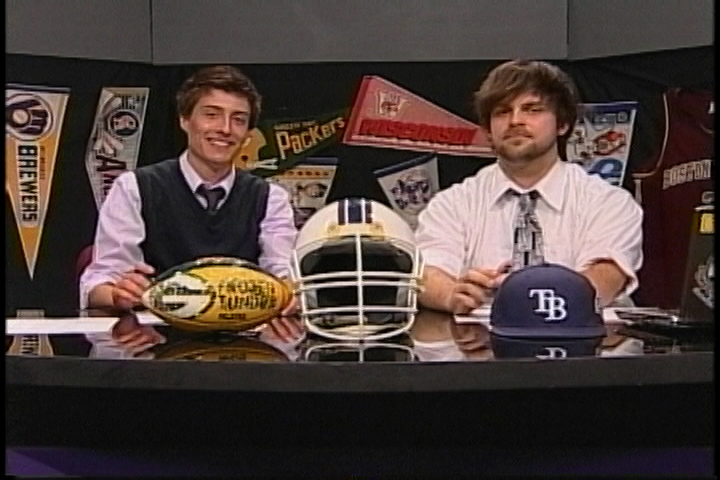 It’s typical each college semester for media studies students to enroll in a production or practicum course and create an original program or series for broadcast. The student producer or team of producers determine a title for the show and number of episodes, write the scripts, audition talent, shoot, edit, export and schedule for air. When the course and semester is completed, the students move on, and the series transitions to the video vault for archiving. This may be the life expectancy for most original student college programs, but one exception to the rule is UWW-TV’s PEOMIOSFYRDS.

Originally created in the fall of 2008 by UW-Whitewater students Lane Kimble and Adam Cumbee as a class project, this sports debate show not only has the reputation of being UWW-TV’s most uniquely titled program, but most sought-after studio production by auditioning students each semester. According to Kimble, now Assistant News Director at WISC-TV in Madison, the show was inspired by ESPN’s Pardon the Interruption, a 30-minute daily of various topics in the world of sports. “We knew what we wanted to do, but were not sure what to call it,” said Kimble, as he and Cumbee wanted to pay homage to PTI without stealing the name. “We just started putting some words together, and almost by accident came up with the title.” Thus, Please Excuse Our Momentary Interruption Of Sports From Your Regular Daily Schedule was born.

Following a similar premise as PTI, Kimble and Cumbee went on live each Thursday night at 7:30 p.m. in October 2008, arguing their way through a variety of sporting news. Kimble was an avid Packers fan while Cumbee was loyal to the Bears, and that alone made their arguments seem natural as they provided a weekly rapid-fire of topics to the college audience. The two friends continued to produce the show for another three semesters together.

Due to its popularity, incoming student anchors came on board in hopes of earning a coveted broadcast chair on PEOMIOSFYRDS. At first Kimble admitted to not being supportive of the decision to keep the show running after he stepped away. “I first thought, no, this is ours…come up with your own thing!” But after 29 consecutive semesters of rotating hosts and some modifications, Kimble is proud his creation has remained on the air so long since he graduated. He recognizes that he never saw this coming, but PEO has had approximately 20 different producers, 50 different hosts, broadcast over 230 episodes and received eight student broadcast/production awards in its history.

“It’s very humbling,” Kimble said. “I’m flattered to see how our idea has become a part of UWW-TV history.”