Scholarships given to 4 broadcasting students 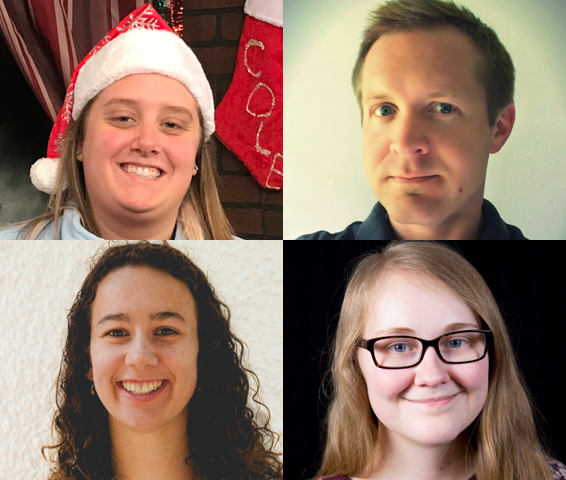 Scholarships were given out Saturday to four students studying broadcasting in Wisconsin. The recipients are:

Born and raised in Elk Grove Village, Illinois, Christine Juhas attends UW-Oshkosh and is a Radio, TV and Film major.

Christine has been heavily involved with Titan TV where she has written and produced content for the weekly news program “The Local Spotlight,” executive produced for WISCO, a live musice event, hosted a one hour SNL-type program, done play-by-play for Titan TV coverage of home volleyball games, and was the creator, writer, producer, and host of the television show “College Life.”

Christine plays rugby and served as vice president of the rugby club. She is also a member of the UW-Oshkosh Comedy Club.

Christine has served as the promotion director for both Titan TV and the campus radio station WRST, with a total of four years of service. She interned at Oshkosh Media last summer and was the official school mascot for two years.

Christine has received the UW-Oshkosh Brenda Lee Lau Storytelling Scholarship, two first place 2017 WBA awards for public affairs and newscast and a 3rd place 2017 play-by-play award. She is also the recipient of the 2016 UW-Oshkosh Radio, TV and Film Don Synder awards for best TV show, best show open and promo. She was also the Doc Synder 2016 Rookie of the Year.

Christine may very well have a future as a performer which ties in perfectly with her career goal to become a TV sitcom writer.

Steven Potter is this year’s recipient of the Wisconsin Broadcasters Association Foundation Scholarship.

Steven was born and raised in Madison, Wisconsin and attended UW-Milwaukee where he received his bachelor’s degree in Journalism. He is currently pursuing a Master’s Degree in Journalism at UW-Madison. His focus is on multimedia reporting and data visualization.

He was the inaugural winner of the Milwaukee Journal Sentinel’s 2006 Above and Beyond award. Steven has also been a recognized member of newsroom teams that have won national and statewide awards.

He has produced news and feature articles for several Wisconsin-based media outlets such as Milwaukee Magazine, Discover Magazine, and the Milwaukee Courier.

Steven hopes to become a multimedia reporter at a major news outlet where he can focus on investigative pieces and features about emerging trends.

Elizabeth Gosling was born and raised in Appleton, Wisconsin. She is currently attending UW-Eau Claire and majoring in Journalism and French Education. She will be graduating in May.

Elizabeth is the producer of the weekly student broadcast “Blugold Radio Sunday,” an editor for the school newspaper, The Spectator, the leader of the UW-Eau Claire French Club, and a volunteer with the National Society of Collegiate Scholars. She had an internship at WHBY in Appleton this past summer.

Amanda Beistle is the 2018 recipient of the Results Radio Scholarship.

Born and raised in Appleton, Wisconsin, Amanda is now attending UW-Oshkosh and is majoring in Radio, TV and Film. She will graduate in December.

Amanda currently serves on the UW-Oshkosh television station, Titan TV, executive board as the operations manager and formerly as news director. She is also a producer and general crew member. Amanda has also been involved with the campus radio station WRST-FM.

In addition to her campus radio and television experience, Amanda is also currently serving as a media specialist in the Department of Residence Life. In this role she captures and organizes event media coverage and produces instructional, promotional, and social media videos.

Her career goal is to get a position with a leading production company in the media industry that specializes in television and online content.

Posted in Educators, In the News | Tagged students
Members Only
Search
Download the WBA “MemberPlus” App