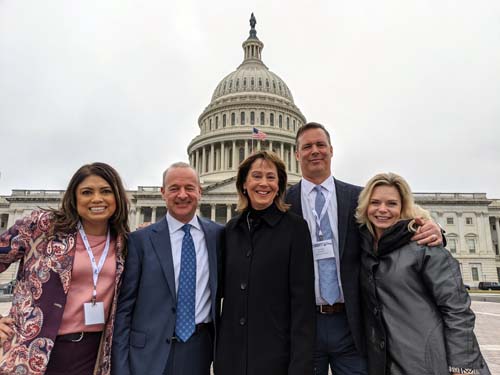 Wisconsin’s radio and TV broadcasters spent two days on Capitol Hill this week talking to lawmakers about numerous issues including a proposal to promote diversity in broadcast ownership.

The Expanding Broadcast Ownership Opportunities Act of 2019 was introduced in both the House and Senate to establish a tax certificate. In the House, Rep. G.K. Butterfield (NC-01) introduced H.R. 3957 and in the Senate, Sen. Gary Peters (MI) introduced S. 2433. These bills would encourage investment in broadcast station ownership for women and people of color and dramatically help underrepresented voices realize their dreams of radio and television station ownership. Rep. Gwen Moore (WI-04) is a co-sponsor.

The WBA delegation also talked to lawmakers about keeping spectrum realignments from harming broadcast signals, keeping a music licensing consent decree in place, supporting the Local Radio Freedom Act (thanking those who are already co-sponsors), and asking House members to join a new broadcasters caucus. Rep. Grothman and Rep. Gallagher agreed to join the caucus and others expressed strong interest.

Thank you to all the WBA members who joined their fellow broadcasters to call on Congress. You are the face of local broadcasting and did an excellent job showing the important role broadcasters play in promoting safe, prosperous, and connected communities in Wisconsin.