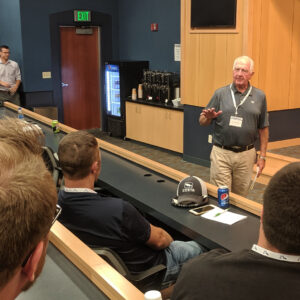 Broadcasters from across Wisconsin spent a morning behind the scenes at Miller Park before enjoying a Brewers win for the 2019 Doug Chickering WIAA Sports Workshop.

The Sports Workshop started Wednesday morning in the Brewers media room with a briefing from Todd Clark and Wade Labecki from the WIAA. They talked about recent and upcoming changes in high school sports. 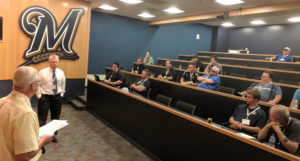 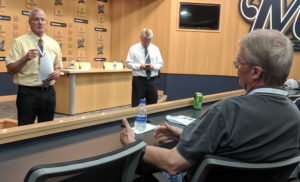 Brewers Radio Network announcer Jeff Levering paid a visit and shared numerous stories from the early days of his career and a tale or two about working with WBA Hall of Famer and Brewers legend Bob Uecker. 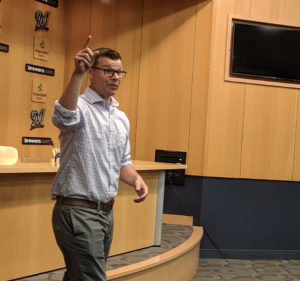 WBA President and CEO Michelle Vetterkind and former WBA President John Laabs managed to get a few minutes with Uecker just outside the Brewer’s clubhouse. 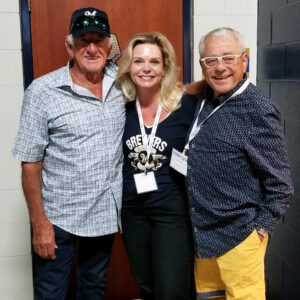 Levering was followed by the Brewer’s new PA announcer Mark Richards, who is also an on air personality at WKLH-FM in Milwaukee. Richards talked about how he got the job and he pulled back the curtain on the role the PA announcer plays in the production of all the elements surrounding the ball game. 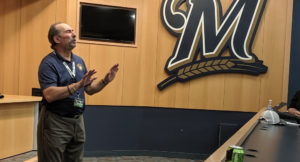 After a feast of ballpark food the Sports Workshop attendees took their seats in the ballpark to see if the Brewers could salvage a win from their series against the Cincinnati Reds. After a series of runs from both teams in the first half of the game, the bats cooled and the Brewers held their 5-4 lead to win. 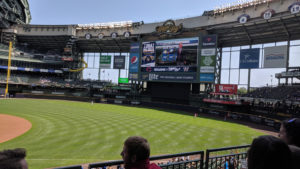