Of the thousands of “How to Succeed in Business” books, mine would be the shortest. One chapter, three words: “I’ll do it.”

If you want to succeed, it’s that simple. Be an “I’ll do it” person.

I’ve seen evidence time and time again of how those three tiny words can change an organization. In fact, one glorious moment of my career would never have happened if it weren’t for those three words.

It was fall of 2013, shortly after our class based UWM PantherVision newscast aired an investigative report exposing holes in UWM’s preparedness for an active shooter situation. I found out that UWM alumnus John Monroe survived the Washington Navy Yard shooting. He heard the gunshots and the screams as 12 of his colleagues were slaughtered.

I e-mailed my class, asking who could do a phone interview with Monroe. No response. Then another e-mail. Still crickets. Finally, student Erin Nordloh replied, “I’ll do it.”

If Nordloh hadn’t stepped up, there would have been no Murrow award, and, more importantly, no change at UWM. Monroe, still shaken by the unthinkable horror, told Nordloh that neither he nor his colleagues knew what to do as the shooter terrorized the building. He said active shooting situations are rare, but so are hurricanes and tornadoes, yet we train for those. He called the lack of training for active shooter situations an “act of malpractice.”

Spurred by Monroe’s comment, we started to question why we train for tornadoes and fires, but not active shooters. Why doesn’t UWM hold lockdown drills? Why isn’t training a condition of employment for faculty and staff? Or a training video shown during student orientation?

We surveyed all four-year colleges in the UW System. Not one shows a training video at student orientation nor requires training as a condition of employment. We read hundreds of pages of task force reports issued after the Virginia Tech massacre, including the presidential task force and the Wisconsin task force on campus safety. All focused on police preparedness but barely mentioned preparedness for the rest of us.

We pushed, badgered, and pestered chancellors, administrators, police, lawmakers, and regents for answers. Finally, after dozens of extraordinary stories done by extraordinary students, UWM made some changes.

And it’s all because of those three words: “I’ll do it.” 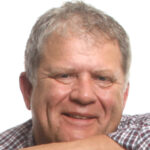